We already took part for the second time at the Abu Dhabi International Book Fair 2019 (ADIBF 2019) from the 24th to the 30th of April 2019, together with our partner publishers, the Faksimile Verlag and Eikon Editores from Spain. We were even represented twice, once with our own stand and a second time integrated in the German Pavilion. On the whole we look back on seven intensive exhibition days where we had the opportunity to get to know the Arab culture in a better way and to share our Western culture, both with trade fair visitors and with other exhibitors. 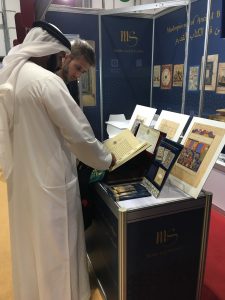 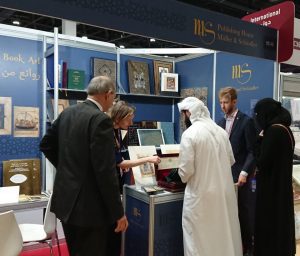 Our facsimiles, especially our fine art single leaves from the series “Masterpieces of Islamic Book Art“ were very well received. Particular interest awoke the ”Leaf from the Blue Qur’an“, “Schema of Mecca“ and “Abū Zayd and his Camels“. It was a pleasure for us to give explanations about our precious facsimiles, to inform in detail about the complex production process and to highlight the superior quality craftsmanship of our products. 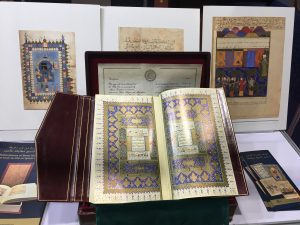 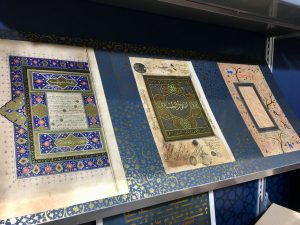 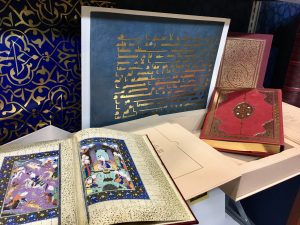 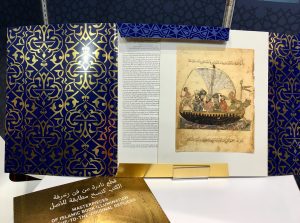 Abu Dhabi is a very young metropolis on the global map, yet this city has a lot to offer. We also took some time to explore the main attractions. Particularly impressive was the visit to the Sheikh Zayed Grand Mosque, the largest mosque in the Arab Emirates, which offers space for up to 40,000 worshipers.

Inaugurated in 2017, the Louvre Abu Dhabi not only impresses with its exceptional and modern architecture by Jean Nouvel, but also with its high quality art objects. Among other things, the museum has a very interesting collection of historical manuscripts. Particularly noteworthy for us were the single pages from the Blue Koran (Link: Fine-art facsimile single page “Blue Qur’an”).

On the last day of the Book Fair, the opening of the exhibition “Codices of Mexico: The Old Books of the New World” including pre-Hispanic manuscripts took place in the Qasr Al Watan Library, located in the Presidential Palace. The Qasr Al Watan Palace has only recently become open to the public and, as a cultural monument of the nation, it invites to international discourses.

But pictures often say more than words, so we have put together a small photo gallery of Abu Dhabi’s sights:

All in all, it was a very enriching book fair for us, especially as the intercultural exchange was in the foreground. Once again we would like to thank our colleagues and friends of the publishing houses for their great support. Thank you! We look forward to the next time!

Blog-entry: „The Islamic world – a journey through the Muslim history and culture“