Jean Fouquet, Pacino di Bonaguida, Simon Bening – innumerable male names from medieval book art have been handed down to us and the assortment by Müller and Schindler also mainly features male artists. We therefore ask ourselves the question: To what extent were women involved in the manuscript production of the Middle Ages?

The search for female medieval artists eventually depends on signed works. But signatures were not always common practice in the Middle Ages, and a signature did not necessarily have to refer to the artist of a work, but could just as well designate the client of a work.

A good starting point for the search for women in the history of book illumination are women’s monasteries, which, like their male equivalents, were important centres of manuscript production.

One of the earliest monastery workshops known to us today is that of Caesaria of Arles, who copied books in the 6th century and also taught the nuns living in the monastery how to write. 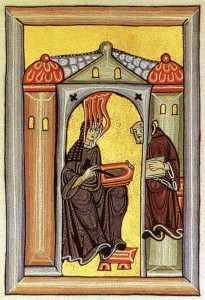 Among the earliest surviving manuscripts that can be attributed to women is a collection of 13 codices that were created in the 8th/ 9th century in Chelles, in the monastery of Gisela, the sister of Charlemagne. One of these manuscripts shows the signatures of all ten writers involved in the work, all of them women, and testifies to their great calligraphic skills.

The earliest surviving illustrations made by a woman can be found in the Beatus of Girona (Girona Cathedral, MS7), whose colophon identifies the mysterious nun Ende as one of the illuminators.

There were also some nuns who not only produced manuscripts for their own home, but also for other monasteries, such as the Spanish nun Londegonda in the 10th century or the German nun Diemud of Wessobrunn in the 11th century, who produced between 1075 and 1130 around 45 manuscripts.

More well-known names are those of the Abbesses Hildegard of Bingen and Herrad of Landsberg, who created the works of Scivias and Hortus Deliciarum in the 12th century. Hildegard of Bingen’s Scivias describes, interprets and illustrates 35 of her complex and powerful visions; Herrad of Landsberg’s illustrated work Hortus Deliciarum is the first encyclopedia written by a woman and summarizing all the theological and profane knowledge known at that time. Even if they did not illustrate their works themselves, they were significantly involved in the visual conception of the manuscripts.

Another well-known name is Christine de Pizan (1364-1431), who did not illustrate her “Hundred Images of Wisdom” (Othea Letters) either, but who is known to determine which motifs should be depicted, and she closely monitored the illustrators. Hildegard, Herrad and Christine thus had an influence on the images that shaped their respective epochs, which should not be underestimated, and they emerged as creative visionaries. 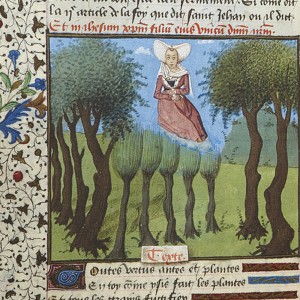 Later, when the monasteries lost their monopoly in manuscript production, member lists of guilds provide valuable information about the participation of women in the manuscript craft. Even if these registers show that women were not denied access to these professions per se, they were decisive outnumbered. In general, women worked more as writers than as illuminators. The list of the Paris guild of book illuminators and sculptors, for example, shows that around 1300 only ten of the 229 members were women. In Bruges in 1480, however, a surprising 25% of the guild of book illuminators were women. Most of these women found their way into book art through fathers or husbands who were practicing the same profession. The increasing urbanization also brought more opportunities for women in respect to the book illumination.

With the invention of book printing, however, the participation of women in book production fell sharply. Handicrafts such as woodcut production seemed to be barred from women. Unfortunately, this immense technical advance for the whole of the Occident was a step backwards for women in book art.

This website uses cookies to improve your experience while you navigate through the website. Out of these cookies, the cookies that are categorized as necessary are stored on your browser as they are essential for the working of basic functionalities of the website. We also use third-party cookies that help us analyze and understand how you use this website. These cookies will be stored in your browser only with your consent. You also have the option to opt-out of these cookies. But opting out of some of these cookies may have an effect on your browsing experience.
Necessary Always Enabled
Necessary cookies are absolutely essential for the website to function properly. This category only includes cookies that ensures basic functionalities and security features of the website. These cookies do not store any personal information.
Non-necessary
Any cookies that may not be particularly necessary for the website to function and is used specifically to collect user personal data via analytics, ads, other embedded contents are termed as non-necessary cookies. It is mandatory to procure user consent prior to running these cookies on your website.
SAVE & ACCEPT