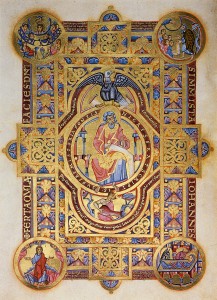 Warning: sizeof(): Parameter must be an array or an object that implements Countable in /home/.sites/426/site329/web/wp-content/themes/shopkeeper/woocommerce/single-product/meta.php on line 15
SKU: 2103 Categories: 11th century, chronological, FACSIMILE SINGLE PAGES, Gospels

This renowned manuscript, one of the great treasures of the famous Bavarian State Library, is an excellent document of the 11th century book illumination produced in the scriptorium of St Emmeran in Regensburg, the residence of the Bavarian Dukes. The codex displays not only the characteristic Regensburg style gathering many folded traditions and contemporary theological and philosophical background, but also the spiritual interests of the patron, the distinguished and remarkable abbess of the Niedermünster nunnery near Regensburg: Uta from Kirchberg (in Suabia). She was of noble descent, well versed in many subjects and took part also in the political events of the time.

The most precious and rather mysterious miniature of this manuscript is that of St John (fol. 89v). He is depicted as the Byzantine prototype, and looks up while being absorbed by the “eagle-like flight of his thoughts”. On his lap lies the empty scroll to be filled with the text of his gospel. According to Western traditions the eagle appears above his head, St John’s attribute and source of inspiration. It stands on the holy scroll and looks up to the scene in the right medallion, where God’s hand blesses John the Baptist – an allusion to the legend, that John the Evangelist was a “disciple” of John, the harbinger of Christ.

Be the first to review “John the Evangelist” Cancel reply