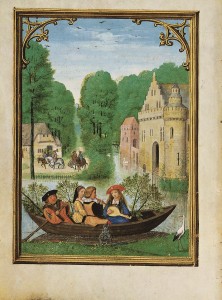 Warning: sizeof(): Parameter must be an array or an object that implements Countable in /home/.sites/426/site329/web/wp-content/themes/shopkeeper/woocommerce/single-product/meta.php on line 15
SKU: 1131 Categories: 16th century, Book of Hours / Breviary, Calendar, chronological, FACSIMILE SINGLE PAGES

Among the illustrates prayer-books for the laity in the later Middle Ages, the “Livres d’heures” or books of hours from Flanders hold a particular place in history because of the amazing number of copies produced and preserved and because of the worldly appeal of their illustrations, especially in the preceding calendar-pages. The main centres of book-production in Flanders were Ghent and Bruges where Alexander Bening (d. 1519) and his son Simon (1483-1561) fostered the tradition of books of hours in their Flemish version. A particularly eloquent example is the so-called Da Costa Prayer-Book (named after the Portuguese noble family Da Costa).

The full-page illustration of the month of May is a good example of the variety and quality of the calendar pictures in the book. During the 15th century two main themes evolved in calendar pages illustrating May in books of hours: the aristocratic outing on horseback and the excursion in a garlanded barge. Both are combined in this calendar picture.

Be the first to review “May calendar image” Cancel reply