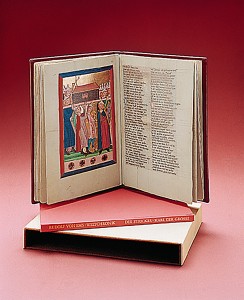 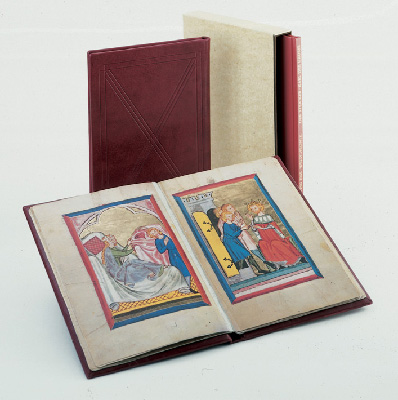 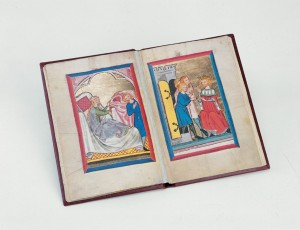 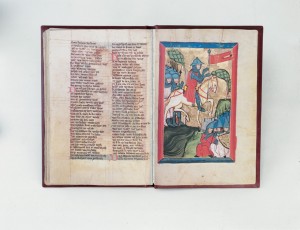 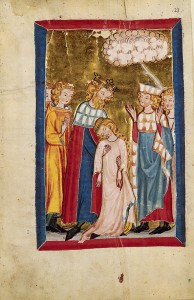 Appearing for the first time in a complete facsimile edition, this manuscript from the former Prussian State Library in Berlin – although only partially preserved – counts among the most important of the magnificent medieval manuscripts created in the German-speaking area. August Heinrich Hoffmann von Fallersleben (1798-1874), student of German philology, librarian, book collector, known as the writer of “Deutschland über Alles,” bought the fragment in 1826.

Warning: sizeof(): Parameter must be an array or an object that implements Countable in /home/.sites/426/site329/web/wp-content/themes/shopkeeper/woocommerce/single-product/meta.php on line 15
SKU: RVE Categories: 13th century, Chronicle, FACSIMILE-EDITIONS

The miniatures and text pages preserved in this fragment were cut out of a manuscript which must have been much more extensive, but any other traces of the original contents have not been found.

Two well-known and popular epics from the period of the Staufer emperors have been united here, the Weltchronik by Rudolf von Ems and Karl der Grosse by Der Stricker. Rudolf von Ems, whose literary activity falls into the period between 1220/30 and 1250, wrote his World Chronicle at the end of his creative period. Writing in verse form in German, he recounts events from the creation of the world up to King Solomon; the unfinished work was intended to be brought up to his own time.

Der Stricker, about whose life we know little, was one of the wandering poets: one of the first truly documented professional poets of the 13th century. His work comprises verse novels and farcical verse in which he proves himself to be a master of novella-like vignettes. His epic Karl der Grosse, written around 1220, brought him the most success. As early as the 12th century, Charlemagne became the central figure of a distinct genre of heroic epic combined with the saga of the hero Roland. The historical background of the work is primarily Charlemagne’s Spanish campaign in 778, when he crossed the Pyrenees to free Spain from the Saracens.

Both works have been handed down in numerous manuscripts which from the very beginning were illustrated with miniatures. The present fragment comes from the Lake Constance area; artistically, the illustrations belong to the group related to the famous Manesse Minnesang manuscript. Scenes full of lyrical beauty and dramatic power are painted in brilliant colours and placed on gold ground. Genuine gold of 23 ½ carats was used for the facsimile and applied by hand according to the principles of medieval gilding methods.

Commentary: about 60 pages. Extensive introduction and description of all miniatures by Wolfgang Irtenkauf. Ten illustrations. Binding of hand-made paper. Both volumes in slipcase.
The edition is limited to 950 hand-numbered copies.